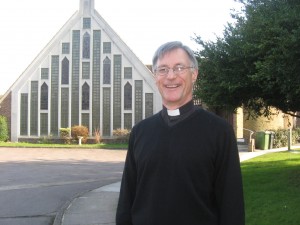 I have enjoyed serving the Lord in Grove and the other parishes of the Vale Benefice since April 2013. 😊

I have loved the Lord Jesus all my life and realised I wanted to follow him since I was 10! ✞

I was ordained in 1980 and my previous jobs as a clergyman have been in West Norwood London; Morden, Surrey and Rochester, Kent before becoming an Army Chaplain. ✞

God has blessed me with a lovely wife and we recently celebrated our Ruby wedding. We have 7 wonderful children and 9 delightful grandchildren.  😊

We moved to the Vale Benefice as a family in 2016, following my curacy in Thatcham. Before becoming a vicar, I spent 10 years moving around the South of England doing Church youth ministry.

I have been involved in the church all my life; I became a Christian when I was 12 on my staircase, I accidentally became the leader of the Christian Union at University and have been a leader on a Christian residential holiday since 1999.

I am married with four children and one cat!

Married to the wonderful Jessie with 3 energetic children, we arrived to the Benefice in August 2019.

Having grown up in a Christian home, I believe I have been a follower of Jesus from a young age, growing particularly through teenage years, but still with a long way to go now!

Most recently I’ve worked for an organisation running Christian Adventurous Activity Holidays, and in a school, where I trained part-time for ministry.

I love sport, largely now as a spectator, with a special place reserved in my heart for Hants CCC and Wasps Rugby Club.